On Guadalupe’s feast day, December 12th, pilgrims including cowboys on horses and nuns on foot, will take to the dusty trails to arrive here.  The center courtyard fills with food, music and dancing all day in honor of the Virgin.  But did you know about the art laden museum to the orphanage’s founder and former Fox and MGM movie star, Fr. Jose Mojica?

Following his mother’s death, the never married Jose decided to end his music and film career, change his name to Jose Guadalupe Mojica and become a priest working with the poor in Peru.  Well, before all that he squeezed in writing a bestselling autobiography and starring in the movie version called “I, Sinner”.  That and he sold his hacienda named Saint Monica he renovated for his mother and used the funds to form the boy’s orphanage and the shrine to his beloved Guadalupe. 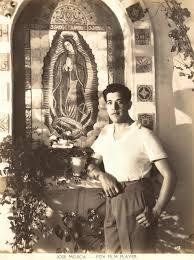 Next to the grotto-like chapel is a museum to Fr. Mojica’s artistic endeavors with albums from his work at the Chicago Opera House and clips of his Hollywood films among the robes and chalices he used when saying mass.

Sister Magda led my group farther back into the apartment Fr. Mojica lived in during his time there that is an artistic paradise.  Every room is filled with murals to the folks important in Fr. Mojica’s life including some of the first residents of the orphanage.

There is also a two story image of Jesus’ crucified torso and arms, but he himself is headless with his neck running into the ceiling.  The point, Sr. Magda explained to me, is for the viewer to place their own vision of Jesus’ face into the work.

Alongside Jesus, saints, local orphaned lads and Fr. Mojica’s pals, there are images of Fr. Mojica’s furry friends eternally looking to make sure their master is satisfied with their behavior.

While visiting a couple in my group that were from Russia and Israel got caught up watching the boys play soccer and started cheering for their goals.  Unused to such attention and lavish praise the boys were stunned and embarrassed which only motivated the couple to hoot and holler more!

Back when the facility was being built, it was when the Social Services building (known locally as DIF) was being built where I now teach seniors how to dance.  DIF was built atop of the ingenious graveyard (the Addams Family-ish Spanish cemetery still stands next door, behind the St. John of God church).  Fr. Mojica used this opportunity to move a large stone cross from the graveyard and place it outside the SMA chapel to Guadalupe reminding everyone of the Virgin’s special tie to the indigenous of Mexico.

Sr. Magda stressed how the nuns are looking for donations to make this artistic and holy site available to the public in time for Fr. Mojica’s upcoming 50thanniversary of his death.  I hope they succeed as it is truly a hidden artistic gem to Guadalupe here in town, and a great place to enjoy soccer!