Last year on my birthday I received a rosary from a student.  I was unsure how to react so I told her I would wear it during an upcoming visit back to Hershey, PA for good luck traveling.

Turns out I liked wearing the rosary as it reminded me to be kind and I did have a really good trip filled with unexpected perks.   (One lesson learned:  You tell the middle aged airline check in representative she looks just like you imagine Brooke Shields looking like these days, and your luggage flies free and regardless of weight!)

Eventually, after months of daily wear, the rosary broke so I decided to make another one and I wanted to place a piece of family history on it.

The woman in this photograph is my great-aunt, Mary.  She is 18 and this was her engagement photograph.  Shortly afterwards, her father became ill and she made a deal with God.  If her father got well, she would call off the marriage and become a nun.

Today I have the large and heavy cross she wore around her neck as a nun.  When opened, it contains relics from various saints, including one named Saint Blandina.  Blandina was my aunt’s nun name so I wanted that relic on my rosary’s small cross.

Saint Blandina was an interesting gal.  She is the first female saint and patron saint of women.  When tossed to the lions in the Coliseum said felines didn’t eat Blandina, and instead took cat naps.  This image of a woman with sleepy lions is Blandina’s classic representation in art .  One of SMA’s early female taxi drivers placed a Barbie in the back window of her cab by sleepy beanie baby lion.  That would be Blandina!

The bulls then entered the Coliseum and didn’t share the lions’ thoughts on Blandina and spiked her about like a volleyball until she died.  Then when her body was tossed into the Tiber River where the Roman goddess of the river flung her corpse back out and her body was labeled incorruptible by the early Catholic Church.  A tiny sliver of said corpse now hangs around my neck daily though the local jeweler is pretty sure it is really a tiny sapphire. 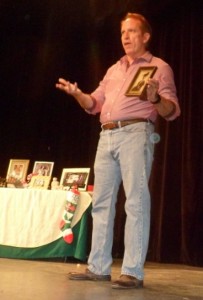 To find a cross to place the relic on, I went to the large local flea market with my friends Yolanda and Nevin.  Here I found this cross that had what looked like tweezers attached to it.  It was a perfect spot to place a relic, or smoke a doobie.

Well Nevin and Yolanda were aghast I had such a thought, until the vendor agreed that was exactly what the clip was used for.  This little relic has had quite the adventure!

So every day, close to my heart, is a relic from a first century saint and my Great Aunt Mary, or a cross-shaped roach clip always ready to light a joint.  The choice is yours, as a big part of faith is believing what you want to!