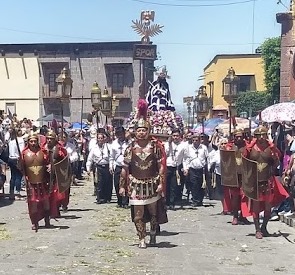 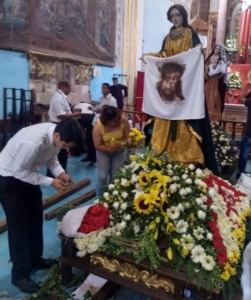 ucked out and was asked again to participate in the Good Friday procession this year plus I got a promotion!   No more being sandwiched between sweaty lads carrying Jesus, who is living proof that with his sinewy physique muscle weighs more than fat.  And don’t get me started on those chubby cherubs.  Nope, this year I got a lantern.

Now, I’ve done a lot of one man shows and dance presentations on stages across Mexico but then I’m always introduced to the crowd and walk on to stage.  It was heady to have the curtain lifted across the portal of the Santa Escuela church (next to the Parroquia) and you’re on in front of a huge crowd.  I’m reminded why performers prefer to die on stage.  It is a high and for this occasion I didn’t need to be funny (or even speak) nor dance. 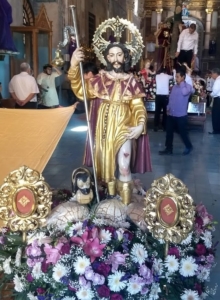 I was behind the procession’s lead statue, Saint Roque (or Rock or Rocco, whom that perennial good Catholic girl, Madonna, named her first born son for).  Roque lifts his skirt to show you his scarred leg letting you know he had the plague.  Kicked out of Rome he survived in the wild when a dog brought him bread daily and licked the plague away.  Today Roque is the patron of dogs and plagues.

Most every vet store in town is called San Roque for his being the saint for dogs though Roque gets the lead today in gratitude for all the plagues he helped end in San Miguel.

The dog next to him, being Mexican, brings Mexican bread.  Speaking of dogs, a live black and white one like the statue followed us for a bit and I saw more dogs in the crowds than ever before.  The lad still bonds with pooches.

In front of Roque were the little girls as angels tossing chamomile for we following to step on releasing their smell and reminding one what a pre-electricity multimedia experience was like.

The Encounter, on Good Friday, is when Jesus meets Mary on his way to the crucifixion and bows his 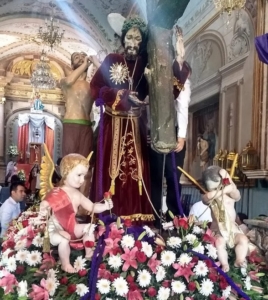 head in shame.  All the really old statues in San Miguel are Inquisition-era Muppets as they’ve a bit a string and pulleys, so Jesus bows his head when seeing Mary in front of the Parroquia.

The Encounter is a procession.  A foreigner learns early on in Mexico a parade is a civic event, like kindergartners dressed as flowers and baby animals to mark the first day of Spring or when soldiers march through town on Constitution Day.  You can cross in front of a parade.

A procession is a faith based event.  Don’t cross in front of a procession!

If I’m one of 20 lads caring Senor Tub of Lard and you cross us a lad will stop carrying Jesus (which puts you on my momentary hate list) to track you down like a dog and humiliate you on the street.  It isn’t pretty.

Even with knowing this fact quite well, I was gamboling solo so if an elderly person was being assisted I’d do the head nod to let them know they could cross in front of me and I’d wait. 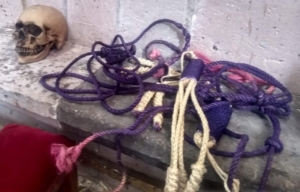 Realizing opportunity is not a lengthy visitor, others would join the elderly in an effort to cross the street irritating other lantern carriers and really pissing off the municipal personnel in charge of crowd control.  Lots of yelling followed my faux paus every time.

During these episodes I’d go to my happy place and thank God for letting me avoid wearing his crown of thorns this year.  Not sure how it happened but I was bloody grateful as a crown of thorns is the worst fashion accessory ever.  It hurts like the dickens and, luckily, as a ginger, I can hide blood stains in my hair.

Upon the end I’m reminded lantern detail rocks.  Yes, my triceps are trembling by the end but it beats crawling on your hands and knees to get a statue up those final steps.  How ladies in towering heels do it is miracle in and of itself.

Speaking of miracles, in the Santa Escuela each year is the cross a mid-1700s priest carried from Atotonilco into town every Good Friday.  Others have continued the tradition. 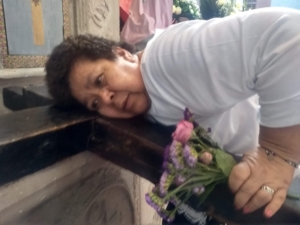 I heard that if you press your ear to the cross you’ll hear Jesus’ footsteps.  In past years I’ve heard nothing but splinters entering my ear.  This year I heard the sound of footsteps loud and clear.  Not a uniform sound, indicating Jesus paused a lot and having now carried a cross, I get that.  Perhaps it is the sound of ancient wood expanding or contracting, but I was wildly impressed.

Another oddity of the procession is you’ll notice those aforementioned chubby cherubs are blocking their vision.  That is because following Holy Thursday’s last supper their role in the Crucifixion story is over.  Jesus dies without their help and they must look the other way.  Hence, angels in town are often blindfolded during this time.

You may also notice the whips everyone wears, a reminder of the Inquisition era belief that pain and suffering brought you closer to God.  On Palm Sunday I had two former Franciscan priests with their spouses of 50 plus years.  (Both wives told me separately that a Franciscan seminary, unintentionally, produces really good husbands.)  One lad told me that with a Franciscan cassock and hood he could barely feel his self-flagellation.

The other man told me how he’d go into his cell and smack his mattress with the whip while yelling “Ow!  Ouch!” reminding me of similar antics I’d perform out of my mother’s eye line, but not ear shot, to get my brother in trouble.

Speaking of physical pain I learned the night before, Holy Thursday, the statue of St. Mary Magdalene took a tumble during a procession and hit her head.  She looked like she had a headache Friday but performed as needed.  “Took a tumble” is a phrase I uttered to my toddlers when they fell so they’d feel like they were part of a circus clown act rather than simply klutzy.

Despite popular belief, St. Mary Magdalene was not a whore.  Rather she was a wealthy and political connected gal from Magdala that was Jesus special pal.  So special, it was she, not his mother or an apostle; he came back from the dead to visit first.  Rumor is following Jesus’ death she meets with the Roman Emperor to convince him Jesus has risen from the dead.

The Emperor states he’ll believe that if she can change an egg on the table’s color.  So Mary Magdalene picks up an egg and in turns wine red.  This act pictures her in art forever in scarlet clothing though not a scarlet woman and where we got the notion of dying eggs on Easter from.

A surprise perk of being first to return to the Santa Escuela is I got first dibs on the flowers lining the returning statues as participants get to pluck away all they want.  I was able to make a nice bouquet to give Natalia, my favorite Otomi Mexican Maria doll maker knowing she was too busy selling dolls to see the procession.  The dolls are called Maria in honor of Jesus’ mother while the boy dolls are Jose in honor of his step father whom isn’t at the crucifixion so it is believed he died prior.