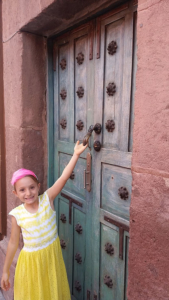 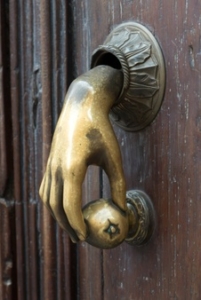 When my children were young I’d like to spook them with tales about the hand door knockers all over town insisting, like Thing from the Addams Family, the hands came to life at night and finger-walked all over town.  That started their instant fascination at pointing (pun intended) them out to me.

Over time I learned the hands had a language of their own.  Jewelry (ring or bracelet) indicated wealth among the caste-obsessed Spaniards in town.  A ruffled cuff indicated the home of a Duke or Marquis.  A piece of fruit is often held in the hand, a nod to our many Colonial Era orchards. Often doors had both male and female knockers you used according to your gender.  Each offered a different tone so inhabitants could decide if the door should be opened. 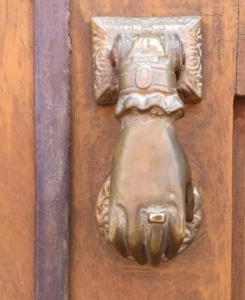 Hand door knockers are known as “Fatimah’s Hand”.  Fatimah was the daughter of the prophet, Mohammed.  Also called “khamas” which is the Arabic word for five, referring to the five fingers on a hand and using your five senses to praise God.  Hand door knockers are long believed to offer protection to the faithful that lived in the house. 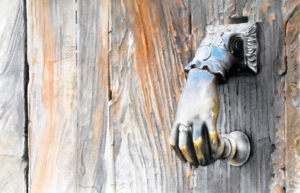 In a real sense, a hand door knocker stands as a sentry at a portal, a delineation between one state and another; outside versus inside, old to new, something lost to something newly gained. Every human emotion and activity has taken place in that thin space between then and now where a single step can change everything.

Today several books have been written about the doors of San Miguel de Allende and countless photographs have been taken of virtually every one of them. No self-respecting door in San Miguel de Allende would be complete without an appropriate doorknocker, which serves as both an adornment as well as a functional way to inquire if anyone might be home. 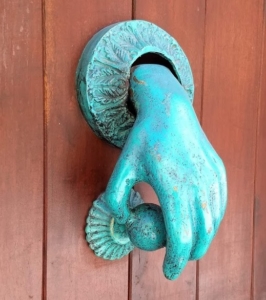 My personal favorite is green and looks as if the Wicked Witch of the West is standing on the other side of the door with just her hand protruding outside through a hole.  Today’s Trivia:  the actress originally cast in the role, Gale Sondergaard, took the part when the witch was to be seen as beautifully evil.  When she became ugly and green, Gale, at 40, didn’t want to be seen ugly and stepped out giving Margaret Hamilton her chance at cinematic immortality.

There’s so very much to be learned from hand door knockers!