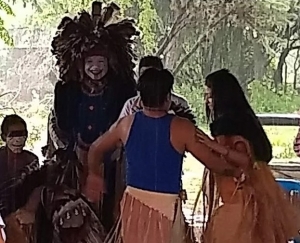 When my kids were young they spent the summer at Colonial Camp living like colonists which sounded like hell to me both then and now, but they loved it.  In the fall were the Civil War reenactments and, naturally, October brought the cemetery tours where actors portrayed mini-biographies of the tomb’s resident.  Today, however, was the first time I experienced some living history in a fiesta. 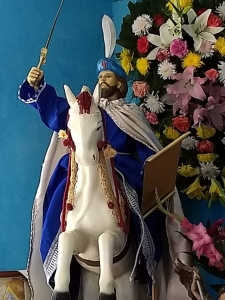 The day long party was in honor of St. James, the first apostle to be martyred, though certainly not the last.  Actually all the apostles had horrific deaths reinforcing the notion that to be palsy with Jesus in his own lifespan was a questionable decision.

After James’ beheading, legend states his body was taken up by angels, and sailed in a rudderless, unattended boat to Spain where he had converted Spanish earlier in his life. He is the patron saint of Spain and pilgrimages to his grave have become the most popular since the early Middle Ages onwards still drawing over 100,000 pilgrims each year.

St. James is said to have miraculously appeared to fight for the Catholic Spanish army against the Moors. Since then his name has been a battle cry for the Spanish armies and was used again when the Conquistadors fought the indigenous Mexicans in the 1500s.  St. James’ image in art is still seen around down featuring him on a rearing horse and beneath the hooves are either Moors or native Mexicans.

Oddly enough it is the indigenous tribes that latched on to St. James in providing miracles and his feast day is still celebrated in the countryside surrounding San Miguel.  The epicenter is Los Lopez, a ranch community between San Miguel Viejo and Ciengeita. 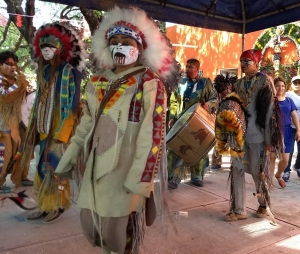 This year’s celebration focused on all-day indigenous dancing as pilgrims came to Los Lopez to thank St. James for his help.

At the ranch of a local grandmother, images of St. James were featured made from every material imaginable from cactus to plastic, paintings to ceramic.  His icon and flower filled altar featuring the aroma of copal to appease ancestors.   Pilgrims came all day approaching on their knees and musicians offered up their music.

Meanwhile, in the front portion of the ranch Otomi women danced wearing gaily decorated hats of bows, tinsel and garland for hours.  I’d like to say I was taken up in their efforts to praise St. James but, really, I was simply visited by the Ghost of Christmas Past.

Growing up my mother was firmly planted in Camp Tinsel, insisting we kids apply tinsel to the Christmas tree one piece at a time.  Suffice to say that sucked all the fun out of decorating and we kids would go behind the tree, out of her line of sight, to wing handfuls on tinsel at each other.  Whatever happened to land on the tree’s branches was simply considered “Christmas Magic”.

My father, in a rare burst of interest in interior design, insisted any tree not wearing garland could be just as happy in some heathen Protestant’s home, so our tree had both tinsel and, to my mother’s dread, garland.

Well, my parents would have loved the Otomi women’s hats placating both their desires with tinsel, garland and bows, just for fun!

The Otomis were the indigenous farming tribe here when the Spanish arrived.  The hunter gathers were called Chichimecas and their pilgrims arrived late afternoon during the Otomis dancing and were widely ignored by the Otomis.  For the moment.

The Chichimecas are show stoppers by their very nature.  They’ve drums the deaf can hear, feathered head dresses and make up that makes many appear to be the offspring of Baby Jane Hudson and Pennywise, the clown from It.  Genetics being what they are, with that make up, the dancers are bound to be featured in your future nightmares.

One of the dancers I realized was my ten year old dog walking pal.  It was great to see him in his element and I was stoked to cheer him on. 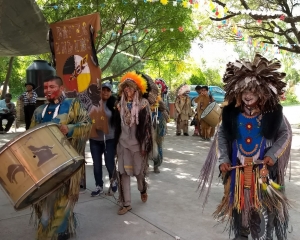 With the sheer volume of dancers and viewers I was corralled into kitchen detail and amazed how big cooking vats can be!  A witch would love one for a super-sized cauldron!  I’ve never seen pots so big and filled with pazole, chicken, rice and mole.  Pazole, I’ve learned, is worth its weight in gold because in a pot of that size the soup weighs as much as gold bricks.

Just then a dog day of summer thunderstorm blew through and the winds picked up the party featuring along with Otomi, Chichimeca and banda music another tent started playing cumbias.  You know where I was!  There is something feral and sexy about dancing a cumbia in the rain everyone should try even if your kabuki makeup wearing nightmare is grinning at you from the sidelines.

Knowing the hostess was a woman of an age (meaning older than me, and how many of those are still around?) I normally give her an image of Mary as a baby.  Since I didn’t know this woman, or if she’d like a Baby Mary with her fascination on St. James, I brought along a pearl wearing Mexican Maria doll named for the Virgin.  Just like the baby image of Mary, the Mexican Maria doll brought forth for her sentiments of being a child and I later learned this gal was once sold by her parents for a five pound bag of corn and beans.  I continue to realize if you give a doll image of Mary to a senior she’ll treat her like a treasure soon be featured at the best seat in the house and heart. 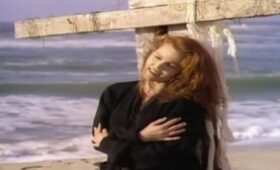 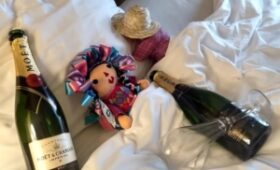