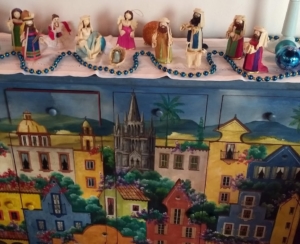 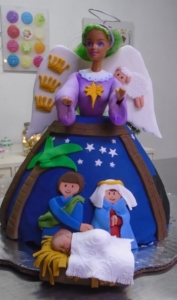 As an avid reader of the International Creche Herald (don’t scoff, it exists) I’ve long been fascinated by nativity sets and the variety of ways they tell the story of Jesus’ birth.  Suffice to say I was thrilled to move to Mexico and discover a whole new array of traditions to share with you.

You may have noticed often there are two baby Jesuses in the manger.  That’s a throwback to the indigenous belief that if you have something good, you’ve got to have the corresponding not so good.  Consequently, if Jesus is God then he must have a twin that is merely human named Thomas (for twin).  They don’t need to look alike, or even be the same skin tone, since they aren’t identical twins. 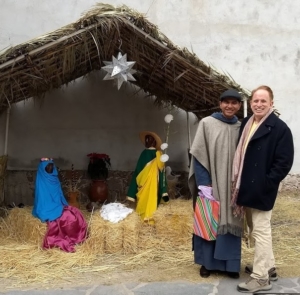 Not to be confused when you see a multiple of Jesuses of various shapes and sizes in a nativity.  That marks how there were nuns in the family tree and when those women took their final vows they received a Baby Jesus doll to represent the babies they weren’t going to have.  When the nun died the Baby Jesus went back to her family to be part of the nativity set.

Speaking of size, as everyone knows, size matters.  The indigenous felt folks from Heaven were to be the physically largest in a nativity.  Hence angels and Jesus can be huge, way too large for Jesus to have come from a much smaller version of Mary.  Consequently perspective and sizing can be very confusing to we foreigners.

The notion of live nativities was started by St. Francis.  When his followers, the Franciscans, came to town they brought the notion of live nativities to help convert the indigenous.  The big plus to a live nativity is the three kings are three skin tones and the shepherds can be any gender and race.  This racial variety ensured parts for locals of any parentage or caste, helping convert the indigenous to the new faith and why we have live animals at the jardin’s nativity on the days leading up to Christmas. 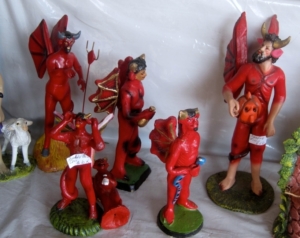 Guanajuato and Michoacán are two states that like to include the devil in a crèche.  The devil is there to remind us Jesus ends his reign on Earth so the devil dashes off to delay the magi and why they arrive nearly two weeks late.  Expect to see a lot of devils around town this time of year!

Also notice that the animals and gifts reflect the local culture.  Of course there is the donkey and Kings’ camels but it’s common to see a Chihuahua or Mexican hairless dog (like featured in the movie, Coco) join the scene.  For gifts the Kings will bring tamales, beans and a baby blanket in a local embroidery style which, when you think about, are much better gifts for a new parent than myrrh.  Personally, I’d of graciously accepted the gold.

Here is photo of my favorite local nativity featuring many indigenous connections to the Otomis (farmers) and Chichimecas (hunter gathers) here when the Spanish arrived.  The Three Kings are Chichimeca grave offerings unearthed by one of my

students that is a farmer and found them while working in the fields.  Knowing I like this stuff, he gave them to me.  I gave them M&Ms to carry as gifts as who doesn’t like sweets during the holidays?  Plus I gave them wives, Catrinas, based on the Aztec goddess of death that was a skeleton that lived underground in her castle made of bone.  They got dollied up to meet Jesus.

Mary and Joseph are the Otomi made Maria and Jose dolls named for Jesus’ parents.

Baby Jesus is modeled to look like the Spanish.

Behind them, are the devil with his distracting sexy sax playing plus an Aztec design for a star.