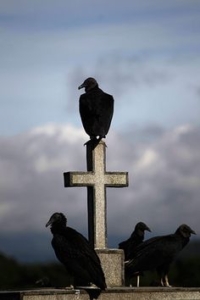 Vultures are making a comeback in San Miguel de Allende.  Normally they stay in the nearby Picachos mountains but lately the Mexican Black Vulture been seen, eerily enough, in the cemetery. 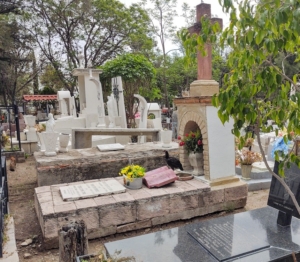 For example, just over the course of the weekend I spotted several on cemetery tours growing from just two vultures to nearly a dozen.

A vulture feasts on recently passed flesh making them a bird forever associated with Halloween, cemeteries, haunted houses and the dead – basically anything with a high creep factor.

A particular characteristic of vultures is their unfeathered head. The bare skin keeps the head clean when feeding, and also keeps their body temperature cool.

Adding to their unique charm and coolness, vultures urinate on themselves as a means of cooling their bodies and wiping off pesky diseases they momentarily acquire from romping among corpses. 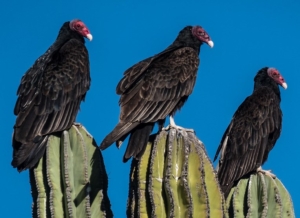 It had been believed vultures had terrific eyesight to spot carcasses from a distance.  Recently science has shown they also possess an amazing sense of smell, unusual for raptors, enabling them to identify a corpse from up to a mile above it.

Vultures are lazy flyers rarely flapping their wings preferring to simply glide on the prevailing winds enabling them to travel hundreds of miles daily searching for fresh kill.

Lacking birdie vocal chords their only vocalizations are grunts or low hisses.  In keeping with their dark public image they don’t sing.

Vultures rarely attack healthy animals, but may congregate to kill the wounded, sick or newborns. Vast numbers typically appear at battlefields, dumps, dumpsters, slaughterhouses and such.

Like some living people, vultures gorge themselves when food is abundant.  With tummies bulging they stay still having a siesta while their meal is digested.  This is how I’ve seen them in cemetery, stock-still as if in the middle of a game of freeze tag.

Still, you don’t want to cozy up to a vulture as when threatened or approached they tend to projectile vomit to lighten their stomach load to facilitate a quick take-off.  Frankly, I never got that close to one in the cemetery to witness their acid reflux.

Vultures are of great value as scavengers. Vulture stomach acid is exceptionally corrosive allowing them to safely digest and remove bacteria from the environment. Fishermen claim that vultures can even digest brass fishhooks!

Ancient Egyptians believed that all vultures were females representing motherhood and the eternal cycle of death and rebirth for their ability to transform the dead they feed on into life.

For the indigenous here vultures were appreciated as extraordinary beings frequently featured in icons and art plus many Mesoamerican myths and legends.

Always remember, as the local vulture population increases, too much inactivity can be dangerous around vultures so don’t stand motionless for long in the cemetery or they might mistake you for their next meal! 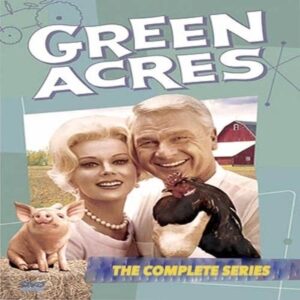 Author’s Note – Growing up near Hershey, PA I can spot a dairy cow at 20 paces but beyond that, it seems, I need a See ‘n Say to correctly identify farm animals.  As both the Audubon Society and Green Acres amigos pointed out to me – those black birds are simply really ugly chickens.

In my defense they didn’t move like chickens (or move at all) or cluck even once.  Plus they do really resemble small Black Mexican Vultures.  What baffles me the most though (in addition to being dead wrong, pun intended) is why the dozens of cats that call the cemetery home upon closing at 6PM haven’t eaten the chickens!?! 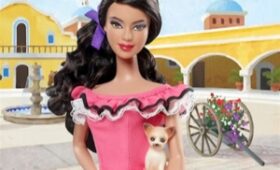 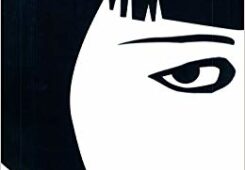 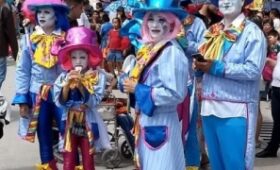