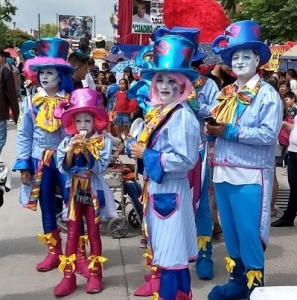 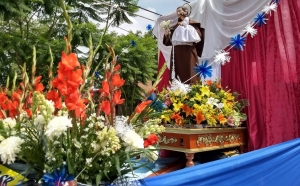 There is a legendary history behind Dia de Locos (Day of the Crazies) involving the viceroy, birds and the gardeners of San Miguel.  Basically, a friar went to mass on St. Anthony’s day leaving his orchard unattended.  Expecting his fruit to be pecked he was surprised to return to realize the birds, out of respect to St. Anthony, had left his fruit alone.

This started a tradition among the gardeners of San Miguel to celebrate St. Anthony’s day by dressing silly, playing loud music and having a procession around town driving the viceroy crazy.  The viceroy instituted strict punishments for celebrating St. Anthony’s day which only caused the day to become even more sexy and attractive, forever growing in popularity.  Today it is our most visited tourist day of the year. 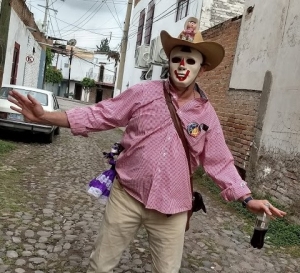 The point to today’s celebration is explained each year in the sermon portion of the mass that begins the celebrations.  Basically, it is an act of faith to get dressed up, act goofy, dance and celebrate to remind yourself all we take so seriously on a day to day basis is of little importance.  Celebrating this life, while awaiting eternal life, is viewing our existence from a more macro level celebrated today by whipping candy into the crowds.

Since I first saw the St. Anthony’s Locos dance in a local procession I wanted to have the experience.  It looked like so much fun.  Being in the Dia de Locos procession one must belong to a preexisting neighborhood group that performs at faith-based festivals around town.  Much like being in a krewe to perform on Mardi Gras in New Orleans.

Occasionally a foreigner gets to squeeze into one these groups and participate. A few years back my writer pal, Patrick, joined the procession as the then candidate Trump.  I thought he was both brave and naïve.  Folks have been killed during a Dia de Locos  procession (a consequence of any event that involves vast amounts of daytime drinking) and to be a foreigner displaying political sentiment seemed unnecessarily risky to me.

When I recently got the opportunity to participate in the Dia de Locos procession I knew what type of costume I wanted.  Something that kept my Gaelic vampire skin protected from the sun, of local significance, non-political and something women in the crowd would not hesitate to dance with.  Obviously I chose to be a Jose doll, the Ken-like companion to the Mexican Maria doll for sale around town made by Otomi women. 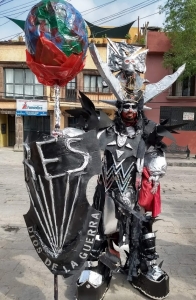 This year Dia de Locos is bigger than ever when the normal nine days of masses and mini-celebrations before the event was expanded to fifteen.  For over two weeks a group of locos from every neighborhood in town had their day to gambol to the church of St. Anthony in his namesake colonia.  The neighborhood of San Antonio has never seen so many daily displays of crazy people.  Well, at least, in theory and these locos came in costume.

Plus there was the Friday before procession for the kindergartners.  It rocks to be five in San Miguel as they are the coolest folks in town that day even when they did have to be roped into little groups to keep from going “too cray-cray”.

My Dia de Locos started with observing a local family get ready.  The adult middle son, Joaquin, takes these events very seriously and opened the door to me with some wicked make up on his face that made me jump back (as was intended).  That was nothing compared to his costume featuring everything from mile high boots to a piñata.  He was magnificent!  Plus he had the best lady in waiting ever, his brother who followed him with a rag to reach up and dab away sweat and a hot glue gun to instantly repair any costume malfunctions.

Up North my family spent many July fourths winning trophies being in parades as the characters in the game of Clue, Scooby Doo or Barry Manilow’s Cococabana.  But back then all I had to do was go to the Party City store to pick up my supplies.  Here entire costumes are made from recycled materials.

For my money, the best way to observe Dia de Locos is to be able to walk down La Ancha from the Institute to La Comer.  Since we had some problems finding the rest of our group I got to do the walk multiple times and thoroughly enjoyed it.

Always best to view a procession (a procession is a faith based event, a parade is a civic one) before it starts.  Folks are wound up, frisky and fun.  I’d pass groups of Batmans, followed by the Jokers.  Then an under the sea adventure, a day and heaven and so on were featured that any prom in the US would be happy to have as their theme.  There was Coco, Looney Tunes, dinosaurs and way too many creepy clowns.  It was like being at Pennywise’s family reunion! 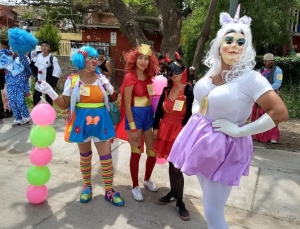 A first for me were the memorials for past Loco participants.  Those that had passed were honored in various ways giving gravitas to a whole lot of silliness.

An obvious distinction this year was sheer organization.  Your neighborhood had an area to go to following mass, we all had color coded pins to identify the area and there was no fraternizing with the spectators.  I was disappointed as I’m used to the many smaller processions were the Locos dance with folks and interact with spectators.  Not in an event of this size.  There was a definitive Us and Them vibe.  Those in the procession stayed on the road and whipped candy into the crossed.  Those watching reached out to grab said candy, using umbrellas for protection, or upside down to collect more candy, but there was little direct physical contact.

Well unless you were the stupid clown I saw that did something amiss that I missed exactly what due to the limited line of sight my mask provided.  A police office was on him like white on rice followed, within seconds, by other cops (including horse riding ones) that used their police sticks to bring him into line.  At that point I had been pondering sneaking off to urinate at the cemetery’s rest rooms.  However, after seeing that display of brute force I’d rather have kidney failure than be approached by Public Safety for literally any reason so I stayed put.

Finally the procession started and off we danced down the street.  Despite having what I felt was a ridiculous amount of candy, all I could carry, I ran out in the first hour.  So as we passed the Allende Institute I said goodbye to my pals and climbed up the mountain, took walking only alleys through the Balcones and came back into town towards my home.  Because, as we all know, nobody likes a doll without dulces! 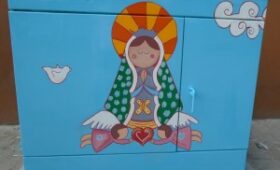 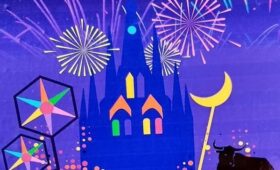 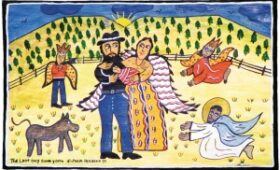